The Least Visited Places in Iceland - Avoid The Crowds

The list of least visited places in Iceland is, luckily, still long and diverse. Even during the busy season, you have the opportunity to have a solo experience in the wilderness. Let's check it out! 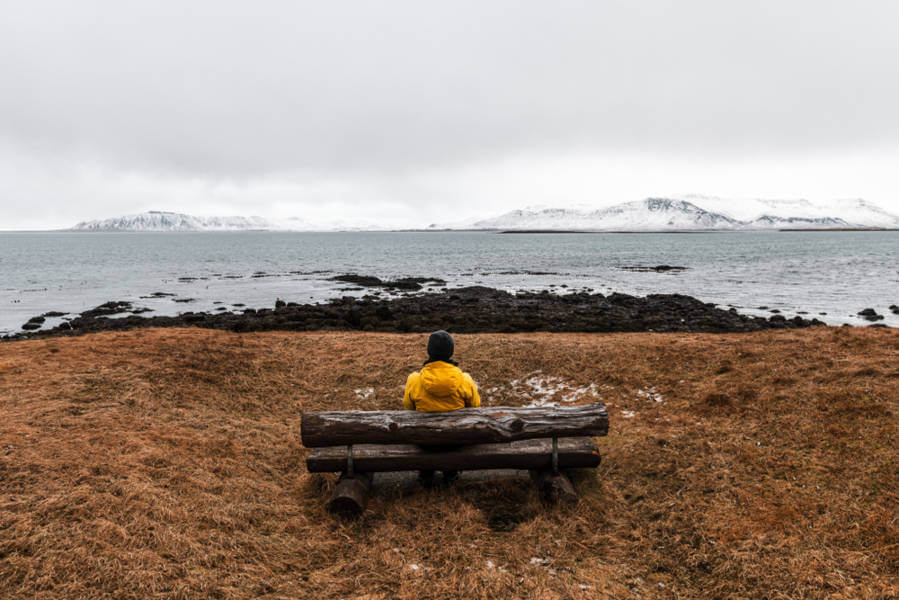 Iceland is a popular place to visit these days, with several million tourists touching down in a typical year. This means that many of its most popular sights and beauty spots can and do get rather busy. But there are ways to avoid the crowds, including favoring some of the least visited places in Iceland.

From the remote to the obscure, we will take you on a tour of some of Iceland’s hidden gems. We will also take a look at the more quiet times of the year to visit the country. As well as offering a few tips and tricks for avoiding the crowds at Iceland’s most well known and well-visited sights.  We’ll be covering the following: 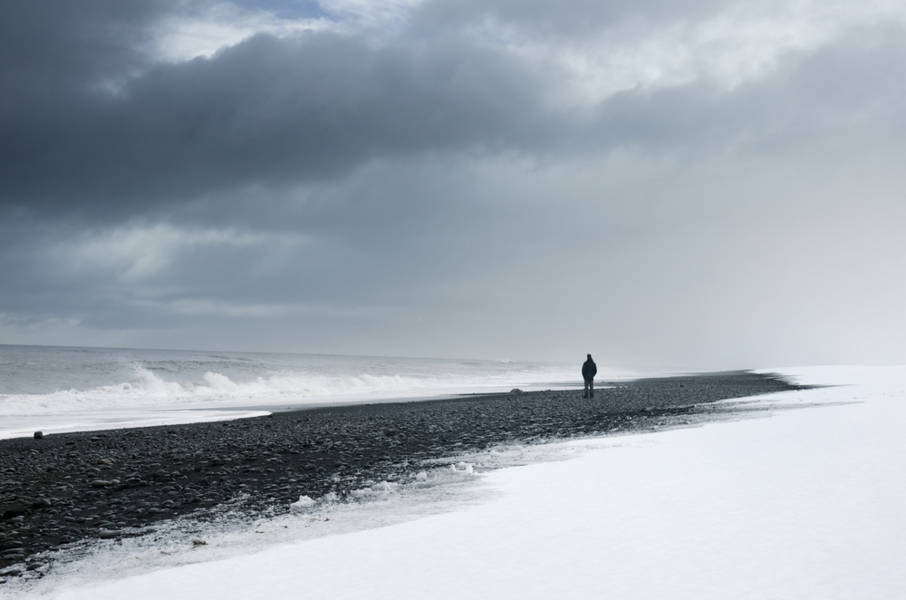 When to visit Iceland

Iceland welcomes its highest visitor numbers during the summer months of June through August. This is when the days are longest and the weather is at its most settled. It is also when the majority of the Southern Hemisphere has their main holidays.

The summer is a wonderful time to be in Iceland. But if you would like to avoid the busiest time of year and you’re able to, then pick another time. The shoulder seasons either side of summer are a excellent bet. We are talking late April and May, or September and possibly early October.

These are the times of year that slot in between Iceland’s long winter and short summer. You’ll find that the ratio of daylight hours and the weather conditions could well be favorable at these times. And we say ‘could’ because the Icelandic weather is notoriously changeable.

Summer is more settled in general, but there can still be wild weather. So it’s really the luck of the draw. You could have a dry and bright couple of weeks in May or you could see snowstorms flurrying through.

But it is fair to say that these shoulder seasons will see fewer crowds right across the country. The winter months are also noticeably less busy, especially if you travel outside of Reykjavík. Winter brings its own peaceful beauty too. With dustings of snow, golden light and dark skies for the Northern Lights to dance in. 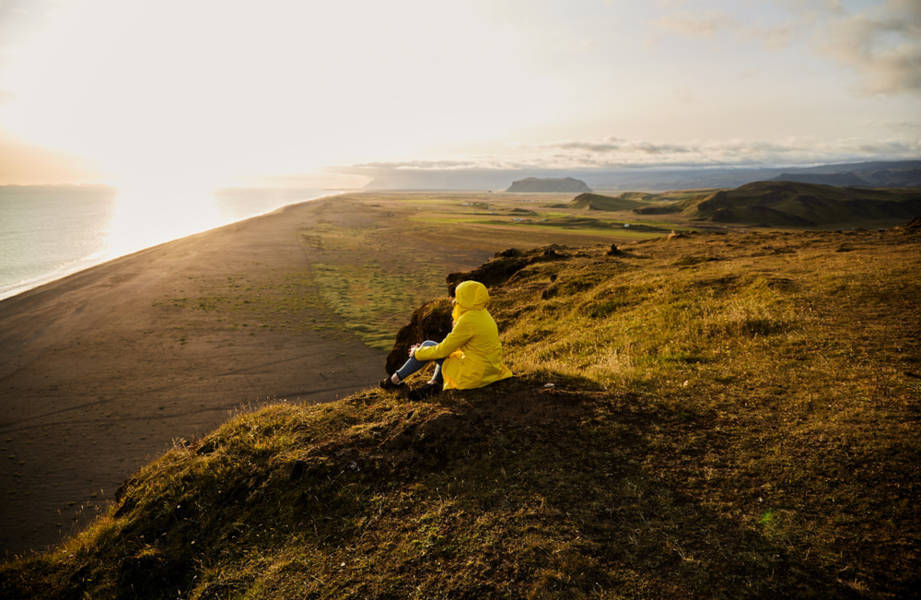 The Least Visited Places in Iceland—Tips to avoid the Crowds

Here are a few of our top tips for avoiding the crowds in Iceland. These should work year round, even right in the height of the summer season.

Experience the Golden Circle sights without the crowds

The Golden Circle must be Iceland’s most famous tourist route, and definitely one of the top things to do in Iceland. This trio of incredible natural wonders lies within striking distance of Reykjavík. As you can imagine, it is well visited throughout the year. Many companies offer day tours of the Golden Circle from the capital.

The buses usually head out of Reykjavík at around 7-8am each morning and return in the evening by about 5-6pm. Each tour group will work their way around the three different sights over the course of the day. This means that early in the morning and later in the evening/night there are far fewer visitors.

During the summer months, the daylight hours in Iceland stretch to about 18 hours a day. So you can sightsee with ease until around midnight, or if you’re an early riser from about 4am. At these times of day, there is often a beautiful golden light bathing the land as the sun dips low to the horizon.

So our tip is this. Hire a car in Reykjavík and park up at one of the campsites next to the Golden Circle sights. That way you can visit them with ease at either end of the day. You never know, you might even find you have the whole place to yourselves! 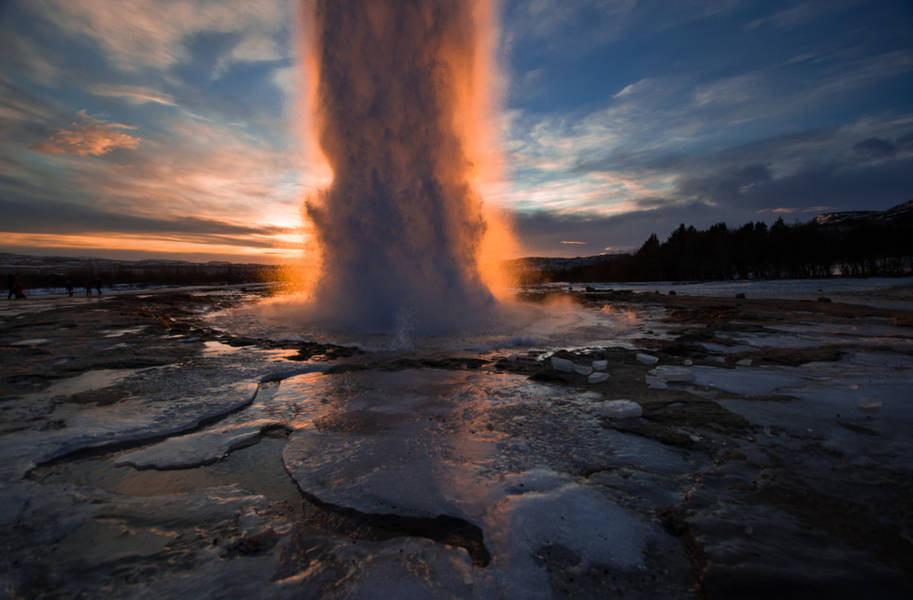 Hike your way into the wilderness

Iceland is a big country with large areas of wilderness. Its mountains and glaciers, vast volcanic landscapes and long daylight hours make hiking a joy here. Even in the summer months, you can easily escape the crowds by hiking off into some of Iceland's National Parks like Vatnajökull or Þingvellir.

You’ll likely come across a few other friendly hikers, but you certainly won’t be queuing up any mountains. So pack up a rucksack with drinks and snacks and make sure you have a decent map with you. Set off early and you’ll be far away from civilization in no time at all.

Visiting thermal hot springs is a way of life in Iceland, and they have it down to a fine art. We’ve all heard of the Iceland Blue Lagoon. As relaxing as it might be to lounge in its balmy waters, it is certainly not secluded. To secure a bathing slot here, you sometimes have to book it weeks or months in advance.

But there are loads more hot springs in Iceland besides the Blue Lagoon. So for a more tranquil soak and far fewer people to share your space with, seek out the alternatives. We particularly like the Mývatn Nature Baths in North Iceland and the Secret Lagoon in the south. 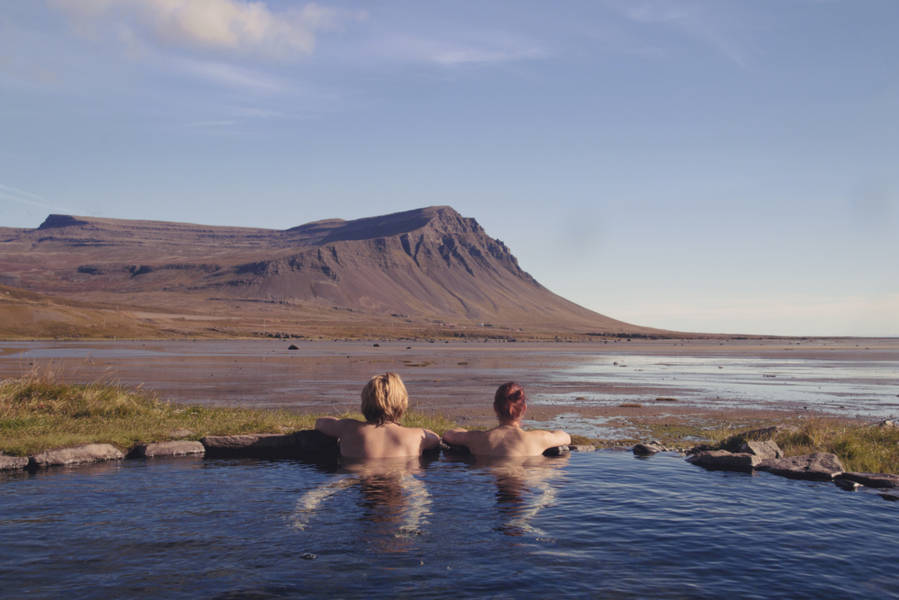 Here come our top five hidden gems in Iceland. These are places where you can enjoy a quieter road trip, even during the summer months. South Iceland and the Golden Circle are at their busiest. But these are routes where you can revel in the open road and experience the sights in more peace.

The Westfjords are perched up in North Iceland on a large peninsular of their own. The region is characterized by high mountains and long sea fjords cutting into its perimeter. There are a few tiny towns dotted mostly along its northern coast, while the interior is pretty much uninhabited.

There is fantastic and challenging skiing to be had here in winter. And in summer, the Westfjords is a wonderful place for a road trip. The countryside here is wild and untamed, and there are plenty of dramatic sights. A circular road route was completed in 2021, so it’s now much more accessible, too. 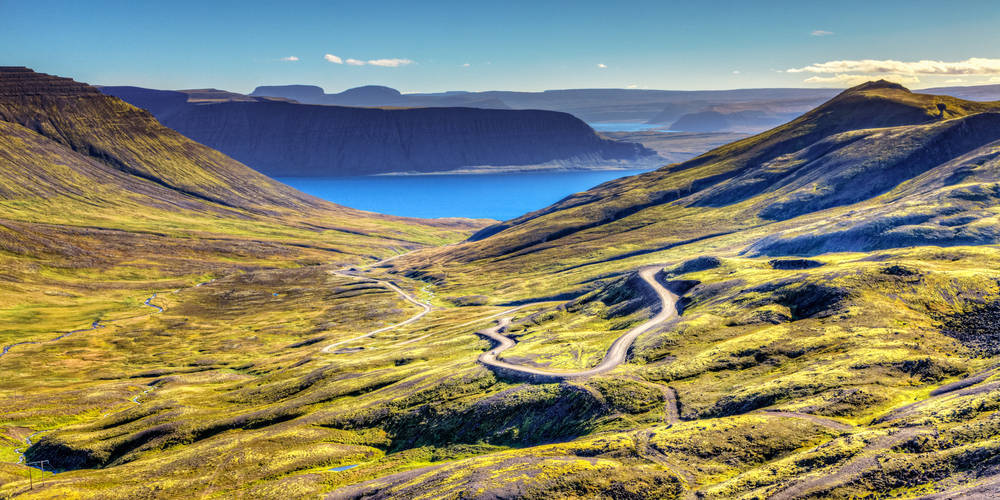 The Diamond Circle is little sister to the Golden Circle, but located up in north Iceland. It has plenty of dramatic sights, including thundering waterfalls and steamy volcanic areas. But it is far less visited than the south. If you’d like to hire a car for a quieter summer road trip this could be the one.

If you’re driving the Iceland Ring Road, then you will pass through East Iceland. However, many people opt to just drive its southern portion or they rush through to get to the north. But there are some real hidden gems in the east, including rugged mountain ranges and dramatic coasts.

The Central Highlands are a vast area of high volcanic plains and mountains. This is a wild place that can only be visited during the summer months. The roads here are rough and a real challenge to drive. They become impassable and are completely closed outside of the high summer season.

Head up into the highlands and you’ll have escaped into an almost primeval landscape. You’ll need to hire a 4×4 in Iceland to do so, though. These F Roads are only navigable in a vehicle with some serious power and ground clearance.

The Southern Highlands are similar to the Central Highlands in terms of access. This is where you will find some of the most stunning summer hiking in Iceland. Landmannalaugar is a mountainous area painted a kaleidoscope of colors by the mineral content of its rocks. You’ll see layers of ocher and rust red, as well as blues and greens. There are also wild hot springs to soak in.

Peace and quite in Iceland

The list of least visited places in Iceland is, luckily, still long and diverse. Even during the busy season, you have the opportunity to have a solo experience in the wilderness. Rent your car today and dare to enjoy the solitude Iceland can offer without a second thought! 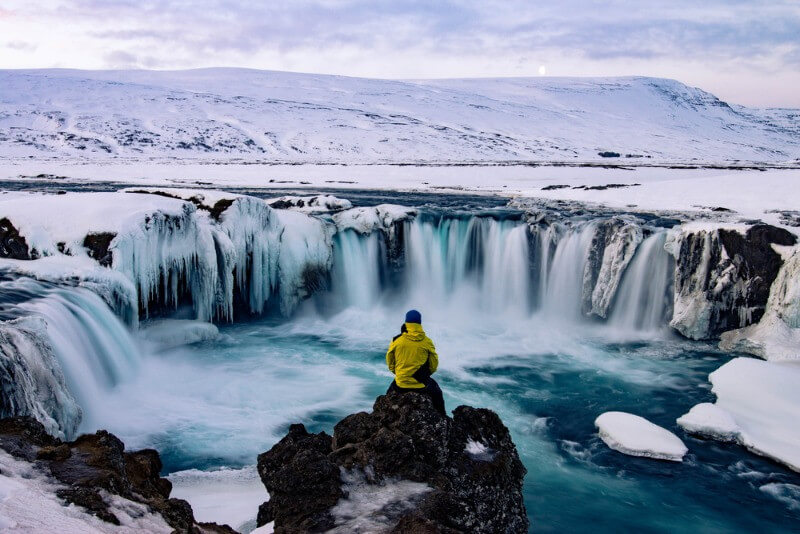 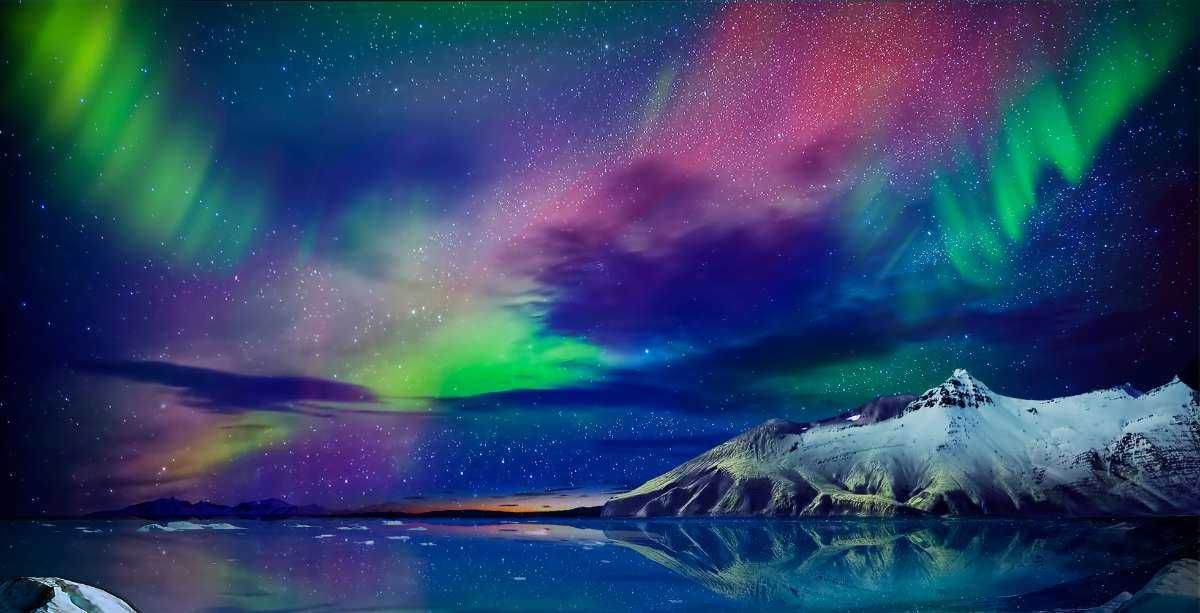 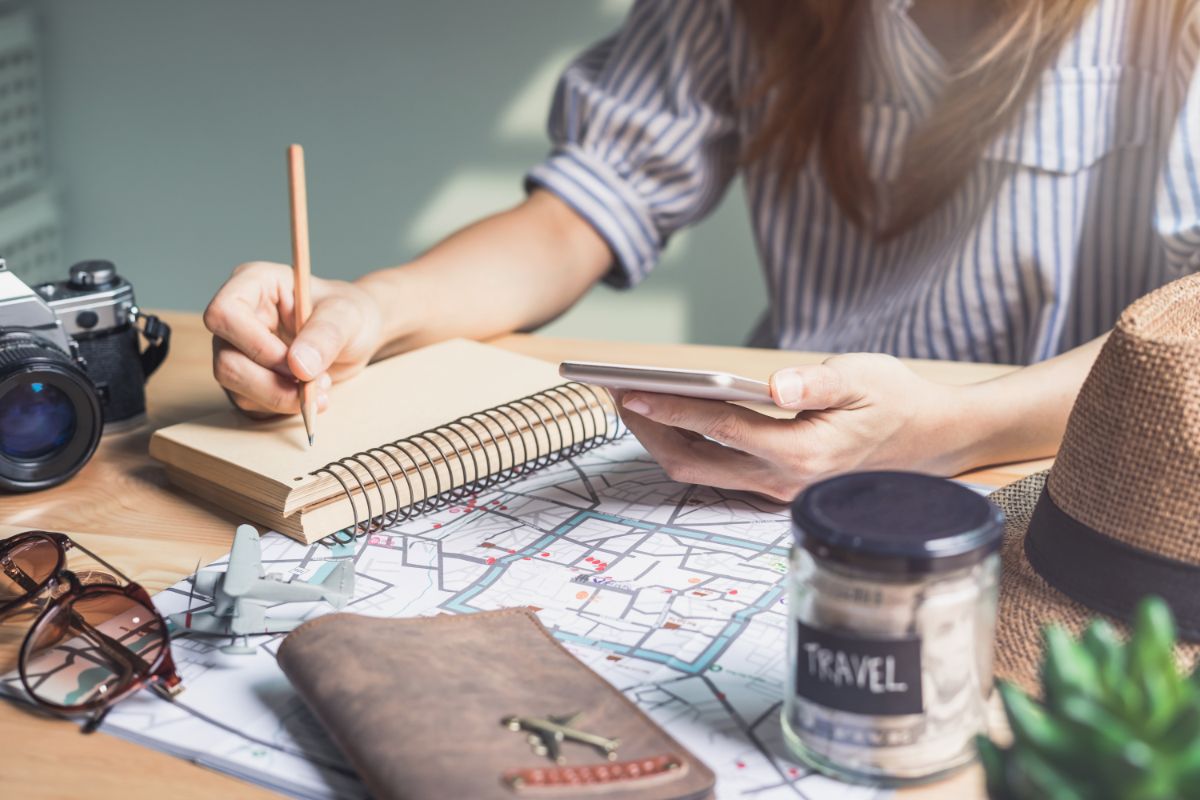 How Many Days Should I Spend In Iceland?