Map of Iceland: The Trip of a Lifetime

Whether you're celebrating your birthday, off on a holiday, or just having a break, this map of Iceland will help build the trip of a lifetime!

When it comes to travel, there’s nothing like the freedom of the open road. Sure, guided tours have their advantages: you’ll cover a lot of ground and gain insights into the places that you visit. But going it alone is the next level. How often in life do we truly have the opportunity to go where we please and do what we want? The only difficulty you’ll encounter is in deciding where to visit, but we thought about that too. Why not use this Iceland map to help you plan the trip of a lifetime?

Let’s assume you’re picking up your rental car, campervan or motorhome at the country’s main port of arrival, Keflavik International Airport. The majority of flights land at this well-equipped airport which sits a convenient 45-minute drive from the nation’s capital Reykjavik. If you just can’t wait to get your road trip started, then we recommend calling in at the incredible Blue Lagoon. This geothermal spa is the most famous of the country’s many hot baths and there’s something gloriously indulgent about luxuriating in warm water out in the open air. Slap on some of that good-for-your-skin silica mud and once you’ve figured out who your designated driver is for the rest of the day, grab a drink from the pool bar. There are cheaper options for thermal baths, but you’ll be hard pushed to find anything that equals the drama of the Blue Lagoon’s setting without compromising on quality. When you finally manage to drag yourselves out, you’ll find hot showers, fluffy towels and hairdryers, as well as a great restaurant.

Snaefellsnes peninsula - Journey to the center of the earth…

Driving in Iceland is an absolute pleasure. Roads are properly maintained and clearly signposted. By the standards of other European countries, traffic is light and drivers are well mannered. With a couple of weeks of vacation time, you can circumnavigate the country without the journey feeling rushed. Pick up your Iceland map, turn left at Reykjavik and make for the beautiful Snæfellsnes peninsula. Much of it forms the Snæfellsnes National Park, and it was here that Jules Verne found the inspiration for his bestselling novel “A journey to the centre of the earth”. Highlights include the wild coastline of Lóndrangar with its sea stacks and the quirky but irresistible shark museum at Bjarnarhöfn where you can taste hákarl (rotted fermented shark) if you dare.

Rewarding detours in the remote north of Iceland

Continuing north, the ring road takes you towards Iceland’s second city, Akureyri. But don’t be in too much of a hurry. Take a detour to Látrabjarg, one of the best sites in the country for bird watching. Its cliffs are home to such impressively large colonies of puffins, razorbills guillemots, gannets, white-tailed eagles and arctic terns that you don’t have to be a keen twitcher to be blown away. Not far away is the isolated Hornstrandir Nature Reserve, located in the extreme northwest of the country. It’s characterized by miles of tundra and flower meadows – as well as the absence of road traffic and permanent residents. Pull-on your walking boots and stride off in the direction of Hornbjarg for one of the country’s most rewarding hikes. There’s no accommodation here, but it’s one of the best spots for camping in Iceland.

Godafoss - Beauty and the Beast 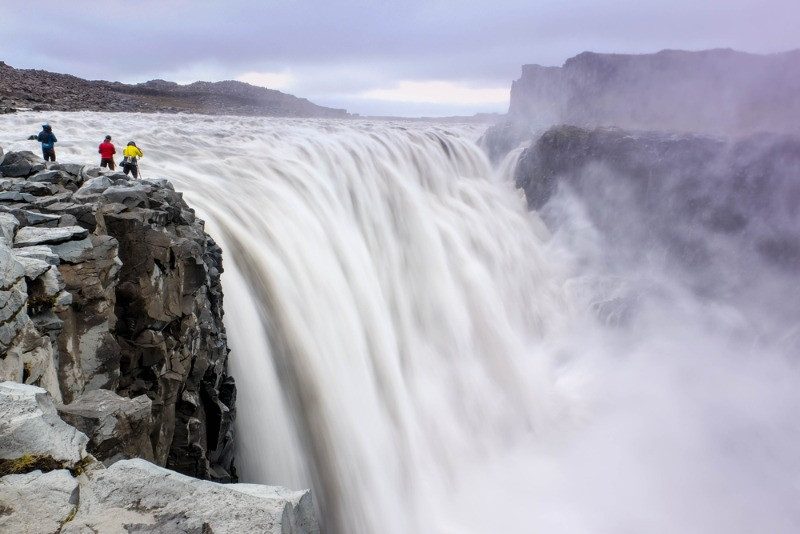 Akureyri is everything you’d expect from a small city: it has an art museum showcasing local and international talent, plenty of restaurants and cafes, and even a botanical garden. Its cathedral features some delightful stained glass windows, one of which came from Coventry Cathedral in the UK for safekeeping in World War Two and has been there ever since. In winter, the city’s ski slopes on Hlíðarfjall Mountain draw a crowd and you’ll find cross-country skiing at Eyjafjördur Fjord. Not far from Akureyri is Goðafoss waterfall, the stuff of legends. When Iceland converted to Christianity, legend has it that law speaker Þorgeir hurled pagan statues into Goðafoss’ waters. While you’re in the area, tick off Dettifoss, another majestic waterfall – trust us, you’ll never tire of Iceland’s waterfalls. It is frequently referred to as the Beast to Goðafoss’ Beauty, on account of the massive volume of water that cascades over its cliff

A short drive east takes you to Lake Mývatn, formed as the result of a volcanic eruption. Don’t miss the Hveraströnd Sulphur Springs, Krafla Caldera, and Mývatn Nature Baths, the area’s answer to the Blue Lagoon. Continue north and the road leads to Iceland’s whale watching capital Husavik. In addition to boat trips, there’s a fascinating whale museum too. To the northeast, it’s well worth pointing the campervan or motorhome in the direction of Arctic Henge, one of Iceland’s newest visitor attractions. Heimskautsgerðið, as the locals call it, is an impressive 50 meters wide and contains 72 stones, each named after a dwarf.

Continue south, via the east’s largest settlement, Egilsstaðir. The ring road takes you towards Vatnajökull, Europe’s largest glacier and the biggest of Iceland’s three national parks. In summer, tour operators take visitors over the surface of this mighty body of ice on an exhilarating snowmobile ride. In winter, vast sub-glacial ice caves become safe enough to visit, including the spectacularly blue Crystal Cave whose ceiling becomes almost translucent as light floods in. Whatever the time of year, don’t miss the jewel of Iceland’s south coast, the incredible Jökulsárlón lagoon. Here, icebergs calve from the glacier and bob slowly along an inlet to the sea, where they’re washed back onshore on the tide. In summer, amphibious boat trips get you right alongside the icebergs. In winter, you might even be lucky enough to watch the Northern Lights dance over the water. It’s arguably one of the most photogenic spots in Iceland, which of course is saying something as so many of the country’s landscapes are utterly breathtaking.

Sights to behold in Iceland: No Rush

You shouldn’t rush the home stretch. Pause to admire the fairytale moss-green canyon of Fjaðrárgljúfur and hike from the road to see the wreck of the crashed DC-3 at Sólheimasandur. Hike to the top of the hill beside the magnificent Skógafoss waterfall for panoramic views over the ocean and along the coast. Nearby, you’ll want to call in at Seljalandfoss too; make sure you walk behind the curtain of water.

A final diversion is in order before you make your way back towards Reykjavik, and it’s to see the trio of sights that comprise the famous Golden Circle. You’re almost guaranteed to exclaim “Wow!” as you watch Strokkur, the largest of Geysir’s geysers, erupt. Be prepared to repeat yourself every few minutes as this jet of water is prolific. Nearby, Gullfoss waterfall rivals its competitors for sheer scale and impact. You’re likely to get a drenching from the spray but that’s all part of the experience. The third site is a little different: þingvellir National Park is where Iceland’s ancient parliament, the Alþing, used to convene. The setting, in a rift between the North American and Eurasian tectonic plates, has all the drama you’ve come to expect on your Iceland road trip and then some. The naturally filtered and amazingly clear waters of Silfra are the setting for the country’s best snorkeling and scuba diving, though it’s so cold you’ll be glad they provided you with a drysuit. 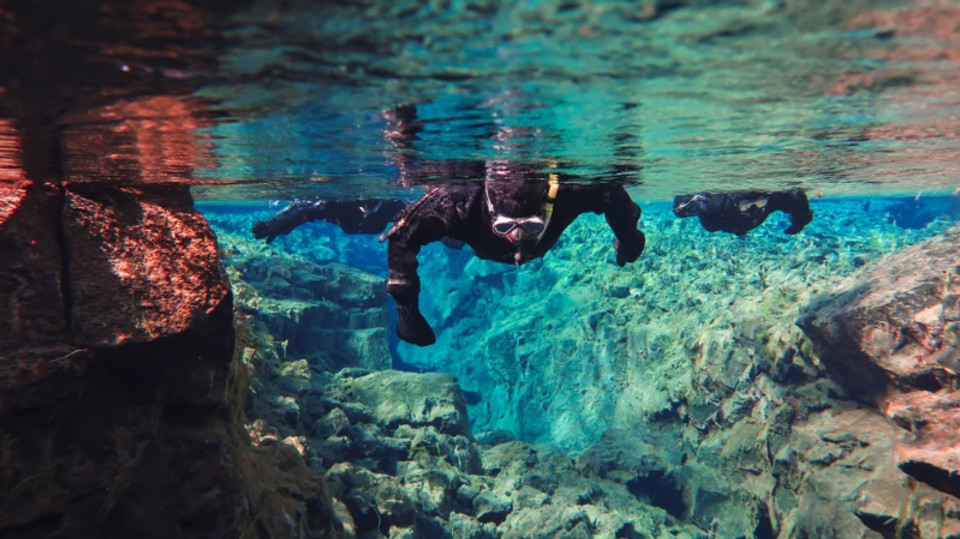 The end of an adventure in Iceland

That’s almost it: point your rental car in the direction of Reykjavik and park up to wander the streets of Iceland’s delightful capital. With landmarks like the towering columns of Hallgrímskirkja, dazzling Harpa concert hall beside the harbor, and several world-class museums, there’s plenty to see. But what makes a fitting finale? Park up beside the iconic Sun Voyager sculpture at sunset, fold up your Iceland map, and toast to the successful completion of an epic trip. 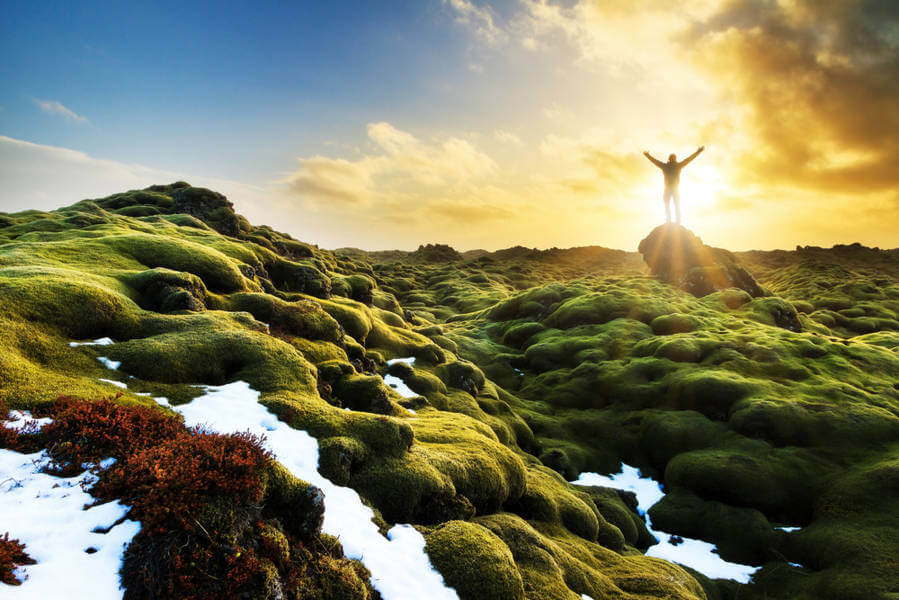 The Best Iceland Nature Tours In 2023