The Best Fjords In Iceland You Should Visit

Get to know a bit more about the spectacular Icelandic fjords. There are more than 100 fjords in Iceland, but we collected the best ones! 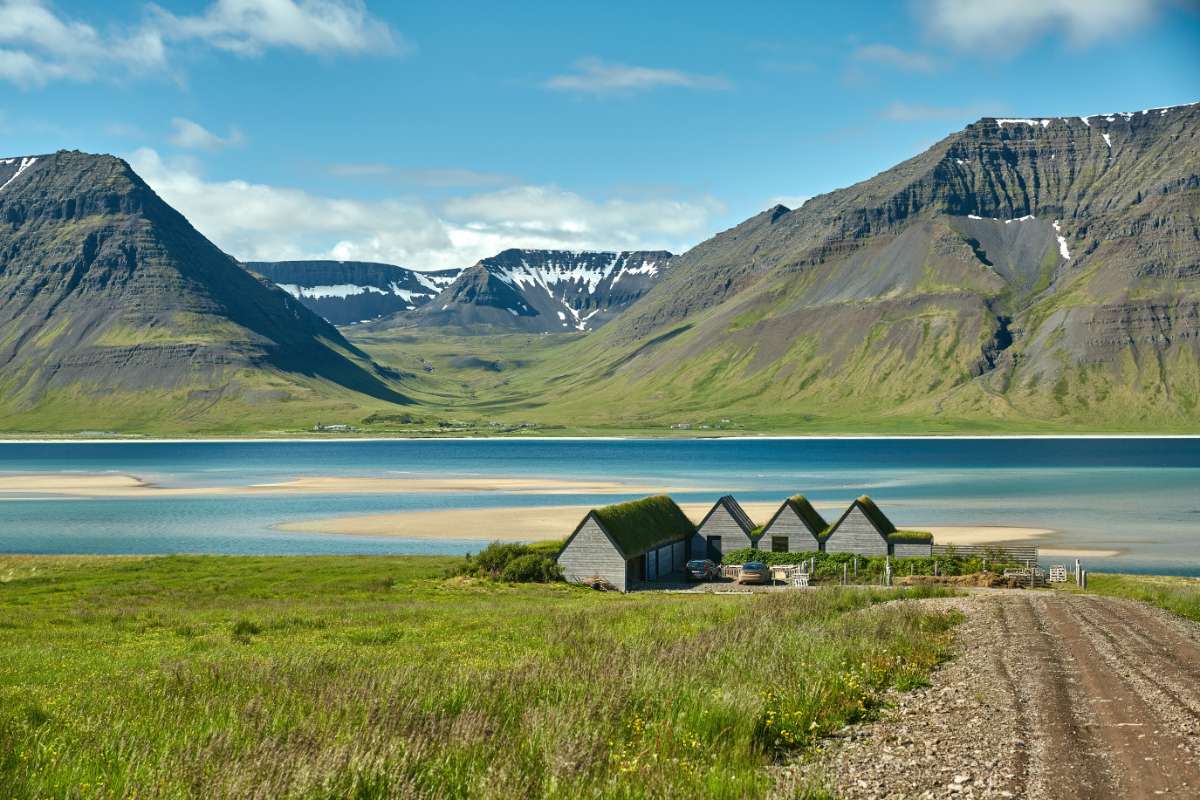 Icelandic fjords are breathtaking. There is a reason why people call them some of the best fjords in the world. These fjords are not just beautiful, but also very diverse in their landscapes and how they were formed.

Each Icelandic fjord has its own charm and story to tell, a story you can experience for yourself on your next trip to Iceland.

Thorsmork, also known as the Valley of Thor after the Norse God, is right in the south Iceland Highlands. It is tucked between three glaciers; Tindfjallajokull, Eyjafjallajokull and Myrdalsjokull.

This mountain range full of peaks and valleys is home to several natural wonders. From glistening rivers, sprawling birch forests, flourishing plants, to lush native moss. The valley itself is called Thorsmork, although locals use that name to describe the mountainous area as a whole.

Thorsmork has plenty of hiking trails which stretch across the Icelandic fjords of the south Highlands. There are varying degrees of difficulty, so there is something to suit most experience and fitness levels. Hiking tours are also available.

Since 2010, when the Eyjafjallajokull volcano erupted, visitors have flocked to the area to see the two new volcanic craters. One crater was named Magni (meaning brave), and the other was named Modi (meaning strong); both are the names of Thor’s sons in the Norse pantheon. 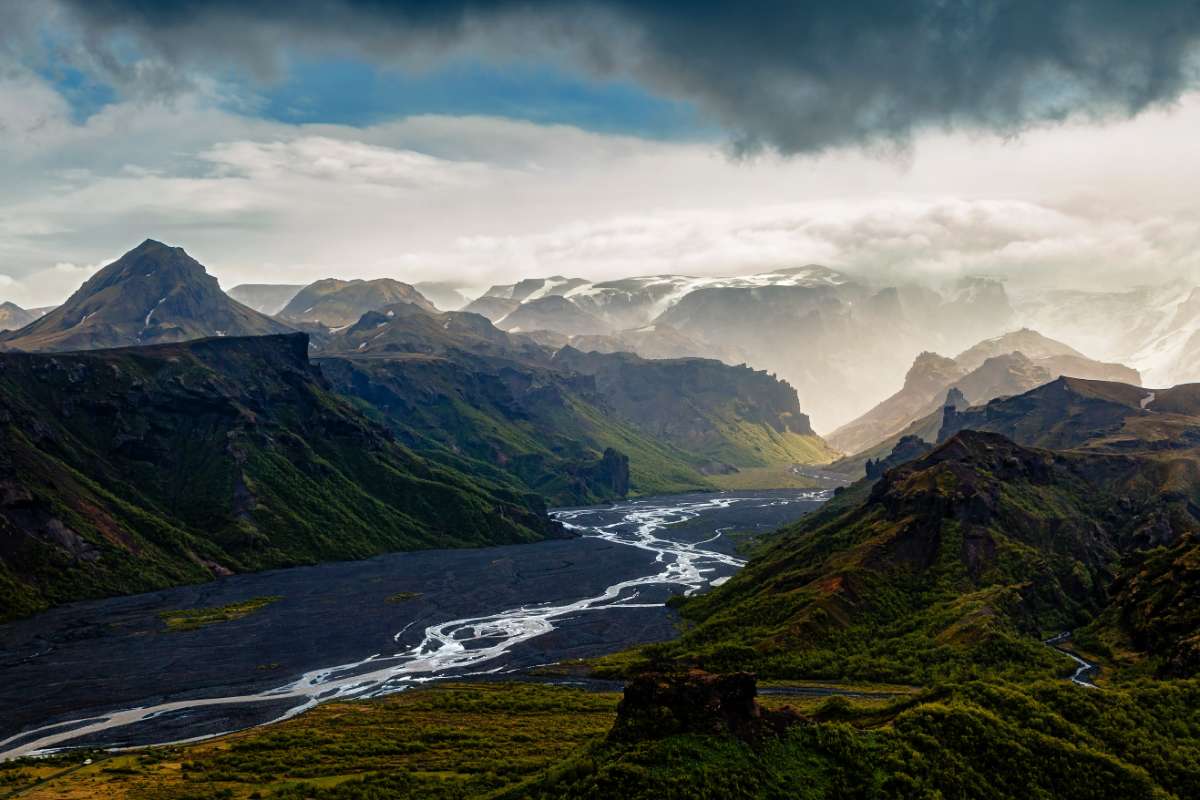 The staggering Thorsmork Icelandic fjord and mountain range is only 150 km (93 miles) from Reykjavík. It is also 100 km (62 miles) from Selfoss town, making it the perfect location for a day out in nature.

Those who choose to self-drive might find it challenging to get to Thorsmork because of its location between the Tindfjallajokull and Eyjafjallajokull glaciers. The roads are very rough and one must cross the River Frossa which can have a strong current. To make the journey less challenging, and more liberating, opt for a 4×4 vehicle.

Between May 1 and October 15, you can catch buses from the bus station in Reykjavík to Thorsmork. Organized tours are also available to Thorsmork. These can range from one day tours to multiple days.

Things To Do Near Thorsmork

If you’re visiting the Thorsmork Icelandic fjord, towns close by include Hvolsvollur and Vik.

Vik is a small fishing village with a pretty famous beach made of black sand. Fans of Game of Thrones might recognize this beach from the show, as it was used for filming scenes North of the Wall.

In the town of Hvolsvollur, near Thorsmork, you can visit the Lava Center. The Lava Center is a museum exploring the science of geology and the volcanic systems in Iceland. Their interactive exhibition is great for families. 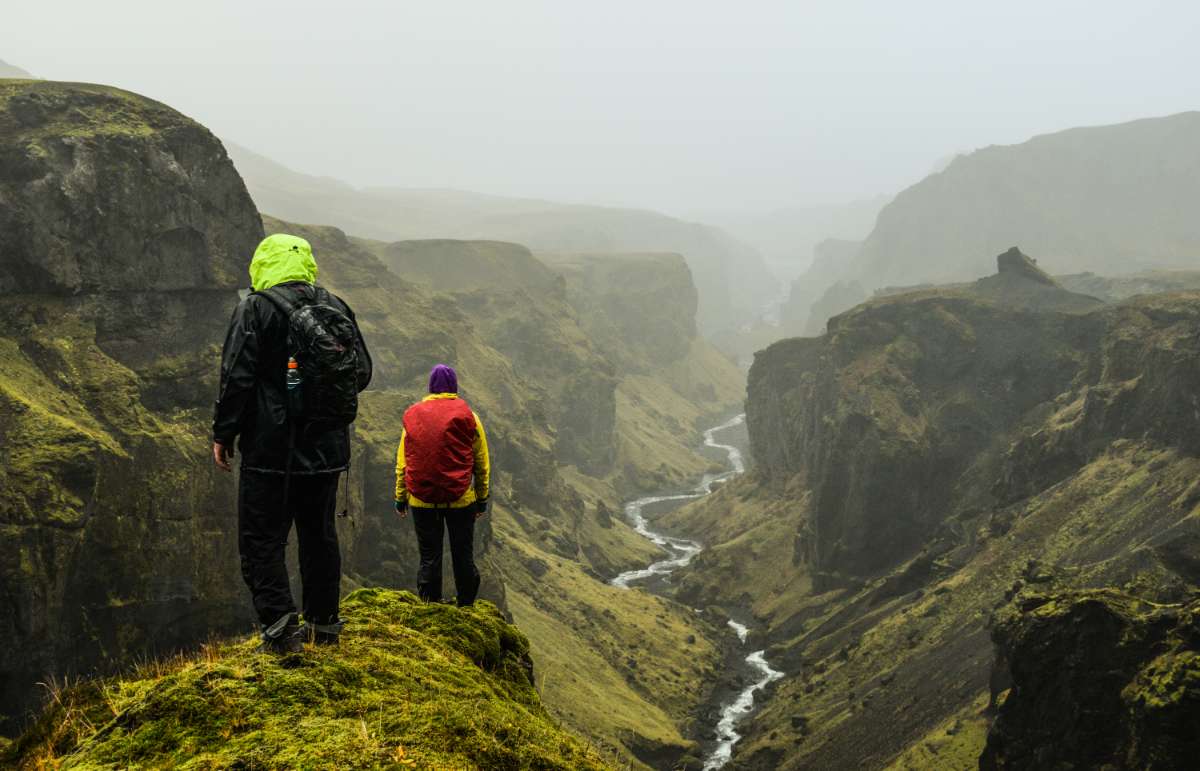 Hvalfjordur is an Icelandic fjord in southwest Iceland. The scenery around Hvalfjordur is varied and beautiful. Its wide areas of flat land bordered by majestic mountains and thunderous waterfalls makes it a sight to behold.

To make things even better, Hvalfjordur fjord is only a short drive from Reykjavík.

Despite Hvalfjordur’s name (it translates to Whale Fjord) there are no whales to be seen. However, an ancient folktale says something different. According to local legend, an elf woman transformed her human lover into a red-headed whale. The whale terrorized the west coast of Iceland until it was defeated. Interestingly, whale bones have been found in the area! 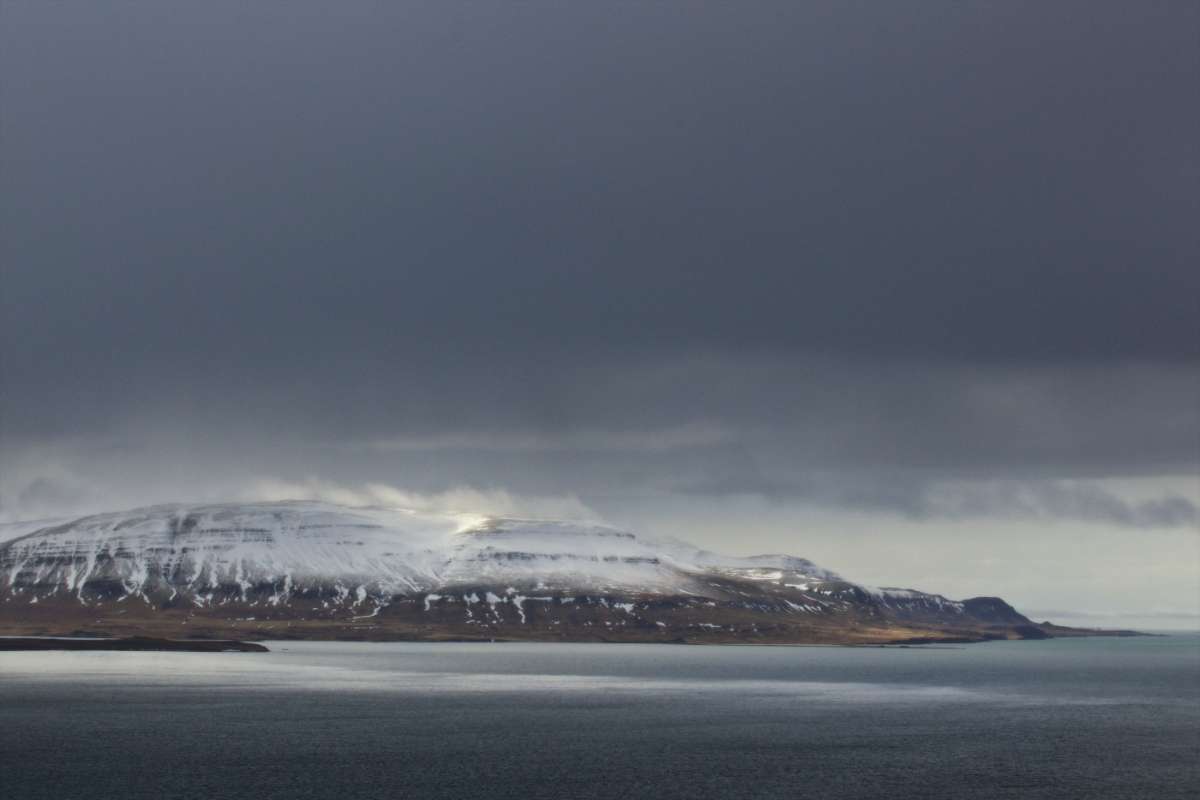 Hvalfjordur is in southwest Iceland and is best reached by car. In the late 1990s, a tunnel was built through the mountains by Hvalfjordur. This was so people travelling from Reykjavík to Borgarnes could bypass the Icelandic fjord. What this means now is that you can’t reach Hvalfjordur by bus, as they travel through the tunnel.

To reach Hvalfjordur from Reykjavík, take the Ring Road north until you reach the sign to turn onto Route 47. Route 47 will take you around the Hvalfjordur fjord.

Things To Do Near Hvalfjordur

If you’re visiting the Hvalfjordur Icelandic fjord, towns close by include Mosfellsbaer and Akranes.

If you’re visiting Mosfellsbaer and enjoy golf, consider taking a trip to the Mosfellsbaer Golf Club. For families visiting the town, try the Lagafellslaug water park.

The town of Akranes is a stone's throw from Reykjavík and close to Hvalfjordur. The War and Peace Museum in Akranes displays exciting exhibits about World War II and the history of Hvalfjordur during that time.

Akranes Folk Museum is spread across different buildings in the town. The exhibitions include life at sea, and the history of living in rural Iceland. There is also a blacksmith area which is often operational for guests to see. An audio guided tour is included in the admission to the museum. 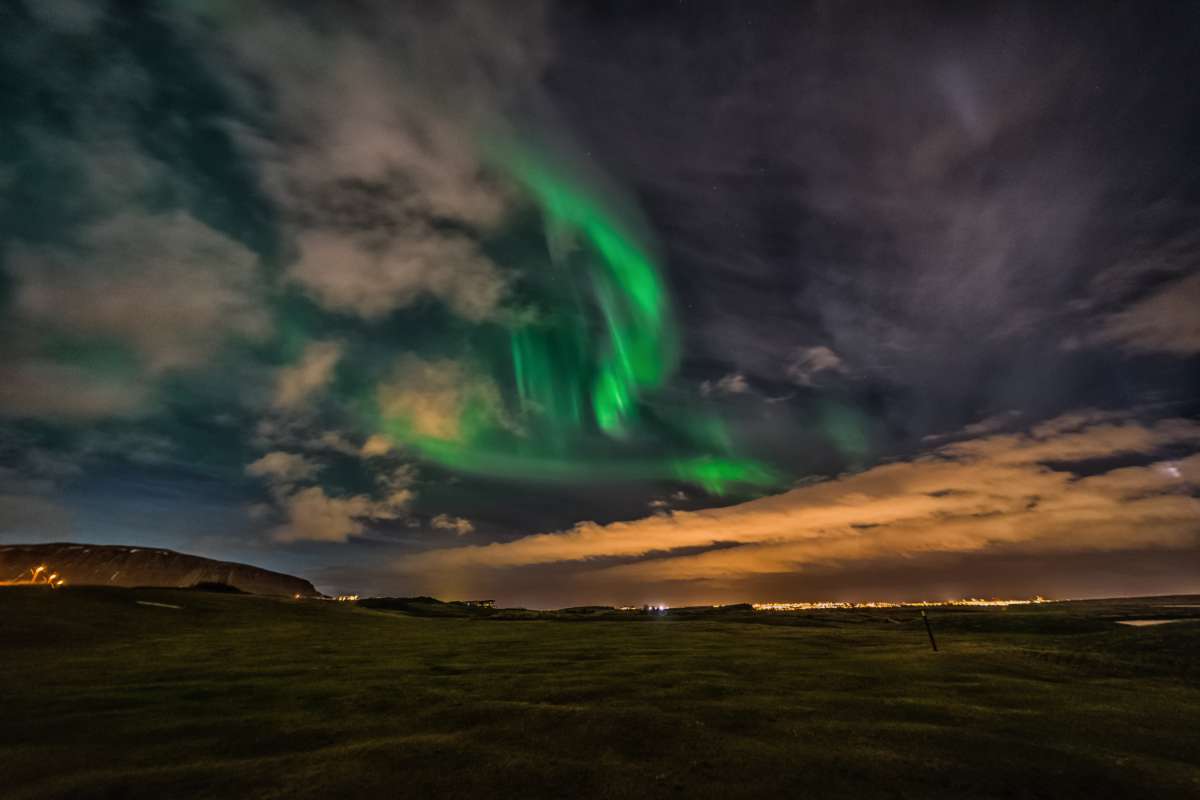 Borgarfjordur is an Icelandic fjord and district in western Iceland. The Borgarfjordur region is regarded by many as the main setting for Icelandic sagas and legends. That might be because of its impressive landscape, nature, and influence on pop-culture. JRR Tolkien took inspiration from this region when writing The Lord of the Rings, as did GR Martin when creating Games of Thrones.

Borgarfjordur is blessed with numerous fjord towns nearby such as Borgarnes, Hvanneyri, and Reykholt. The biggest town in the region is Borgarnes which is beautifully situated atop a hill towering over the ocean.

Borgarfjordur is a valley in the western of Iceland. It only takes an hour to drive to the region from the capital city of Reykjavík, so consider hiring a car for the day and making the journey.

Things To Do Near Borgarfjordur

Borgarnes, with a population of around 1763 people is the largest town near the Borgarfjordur fjord. Attractions include The Settlement Center and the Center for Puppet Art.

Hvanneyri, another fjord town, has an agricultural museum. Here, the development of Icelandic farming is detailed. Furthermore, there is also an interesting handicraft center.

The town of Reykholt, though small in size, is one of the most historically important places in Iceland. It hosts a center for medieval studies called Snorrastofa. This educational center is one of the reasons we know as much as we do about Norse Gods. 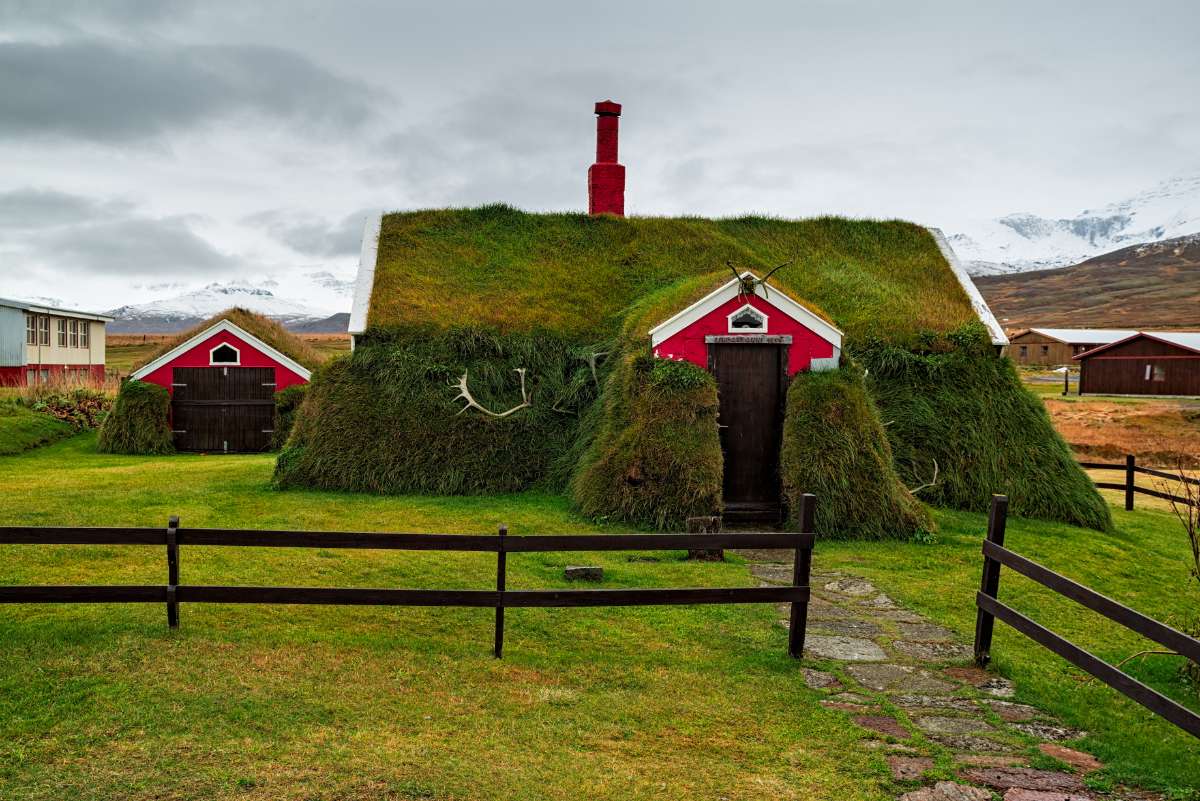 The Westfjords region of Iceland is where you can find unspoiled nature, spectacular landscapes and Icelandic fjords that defy belief. This area of Iceland is far less travelled than the rest of the country, helping to preserve the nature of the area.

The fact Westfjords receive less visitors only adds to this region’s appeal. Just imagine how much smaller the crowds are, but with sights just as awe-inspiring. 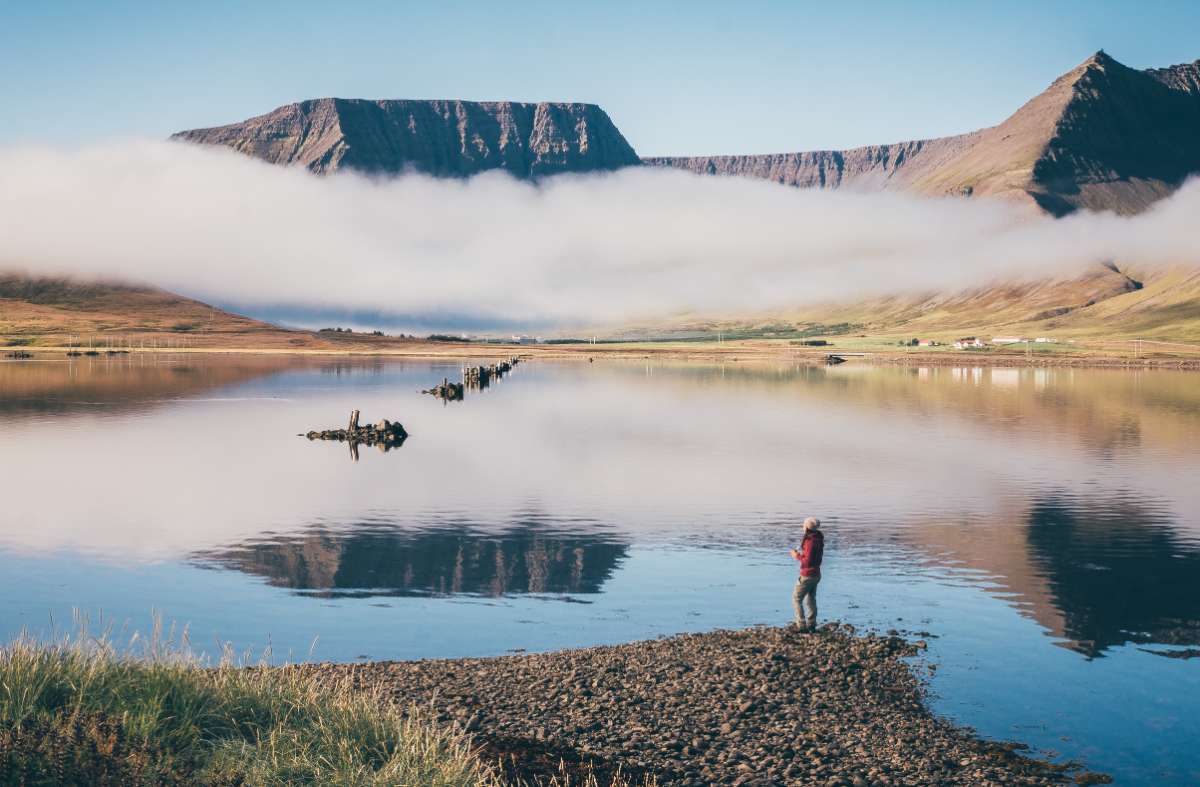 As the name suggests, the Westjords of Iceland can be found in the west of the country.

Due to their remote location, the Westfjords are best reached by car or rental vehicle. The remoteness of the region means a lot of driving will be required.

A drive from Reykjavík to Westfjords can be completed in 4 to 5 hours. Take the Ring Road northbound and join Route 60 towards the Westfjords.

If you’re planning a trip to the Icelandic Westfjords, it’s important to note that they’re best accessed in the summer months, from May to October. Snowfall can be very heavy during winter. There are also fewer people living in this area; therefore, the roads are not maintained with the same frequency as the rest of Iceland.

Things To Do Near Westfjords

The Hornstrandir Nature Reserve in Westfjords Iceland has been deserted since the 1950s. It is the least populated area outside the Highlands. The lack of people living and visiting here has resulted in an explosion in flora, fauna and animals. The Arctic Fox is near impossible to spot in other parts of Iceland, but in Hornstrandir they are thriving.

Take a trip to the Dynjandi waterfall in the Westfjords and enjoy the black sand beach nearby. Dynjandi is a series of waterfalls that fall down a cliff-face in a staircase formation. It is over 100 metres high, the scale of which is jaw-dropping. For something more colourful, head to Raudasandur which is known for its pink sand.

The tiny fjord town of Holmavik looks to be a sleepy fishing village, but is actually home to the Museum of Sorcery and Witchcraft. Here, you can learn about magical staffs, witch hunts and folklore in Iceland. 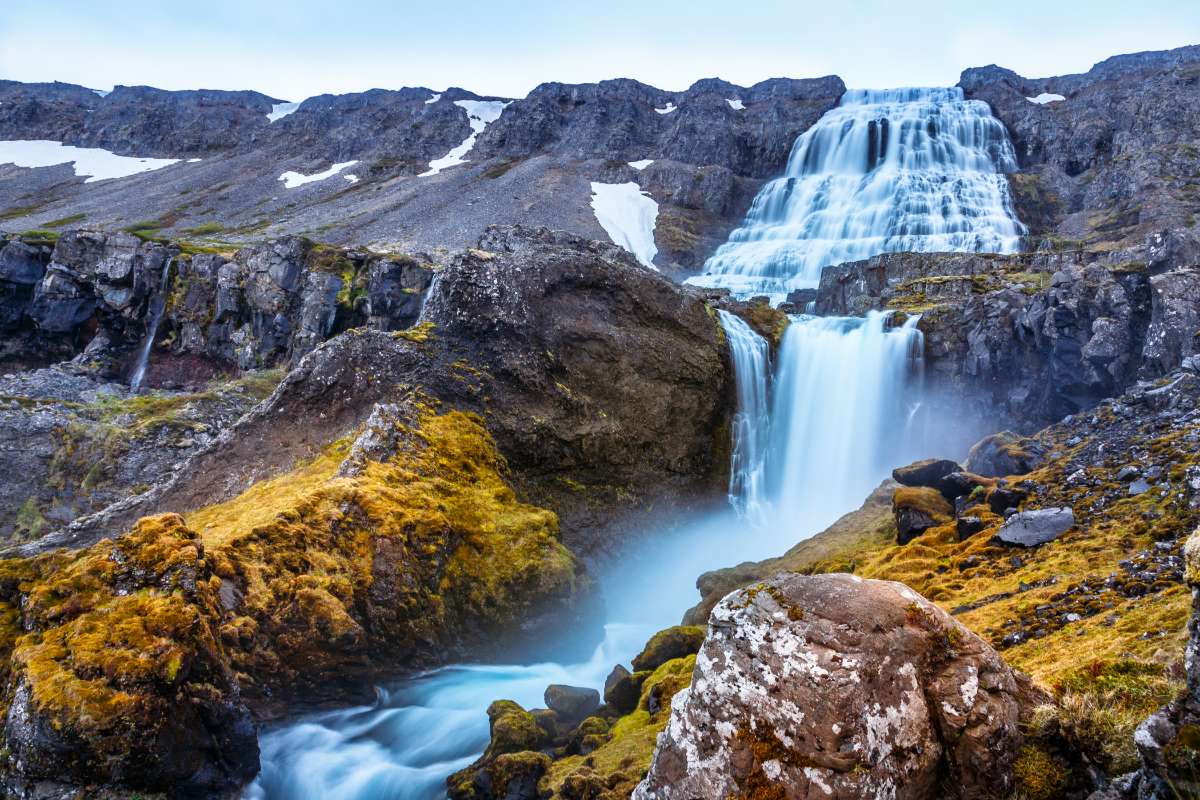 Icelandic fjords and their towns will give you exactly what you’re most looking for on a trip to Iceland. From untouched nature, indescribable landscapes, to authentic Icelandic culture.

Whether you decide to visit in summer or winter, the dramatic landscape of Iceland is sure to impress. 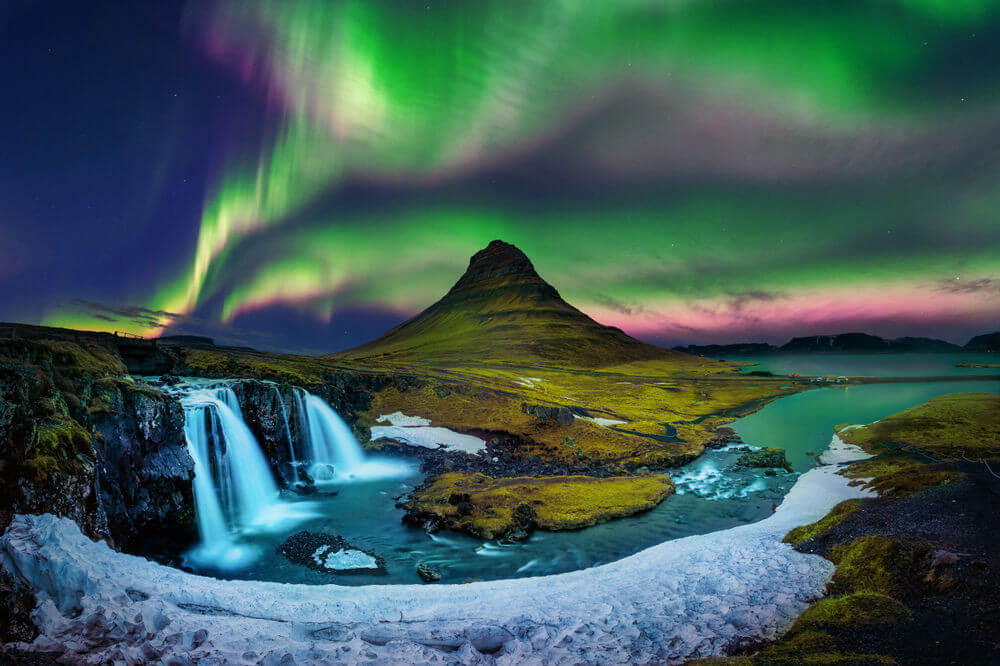 Iceland Landscape In A Nutshell 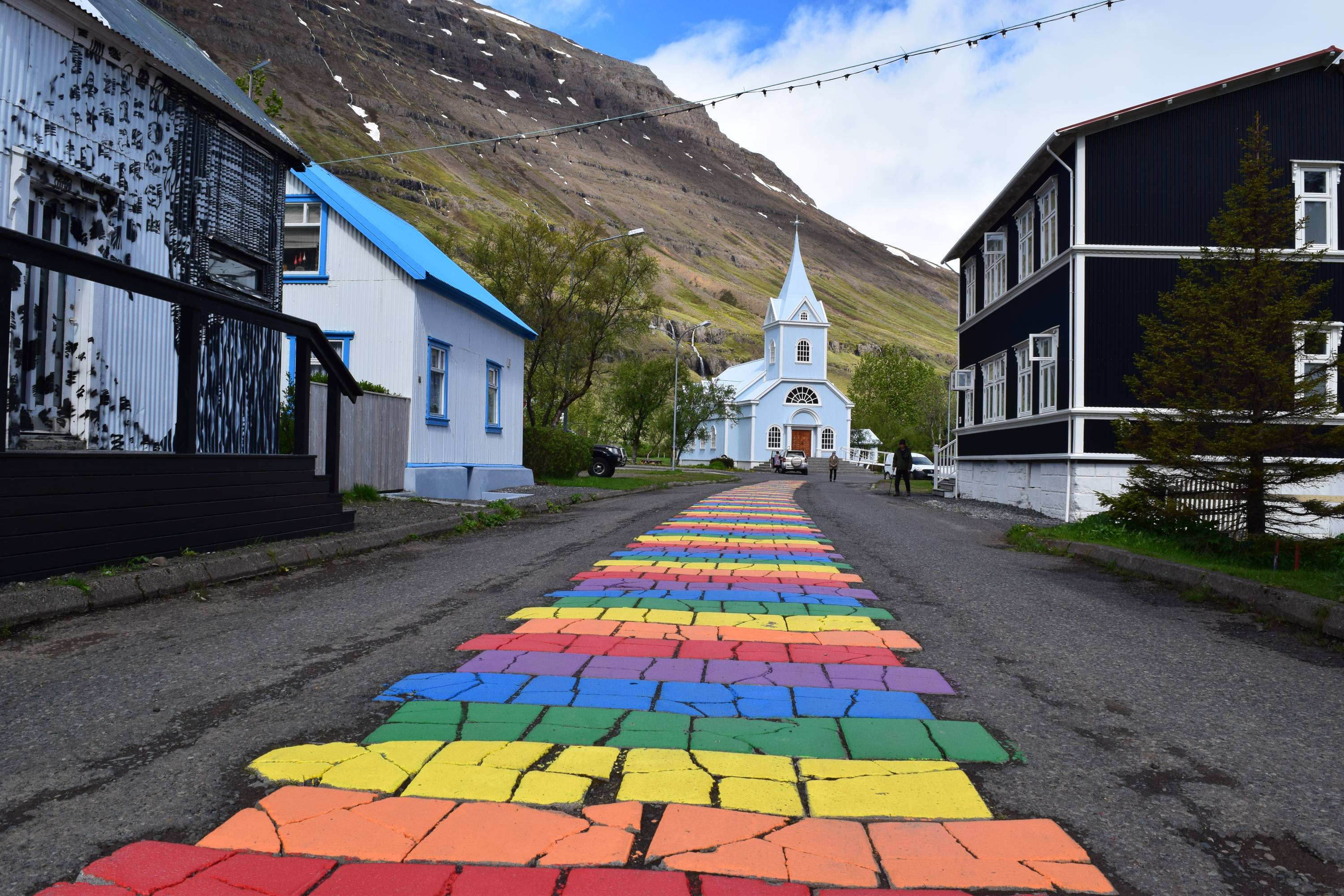 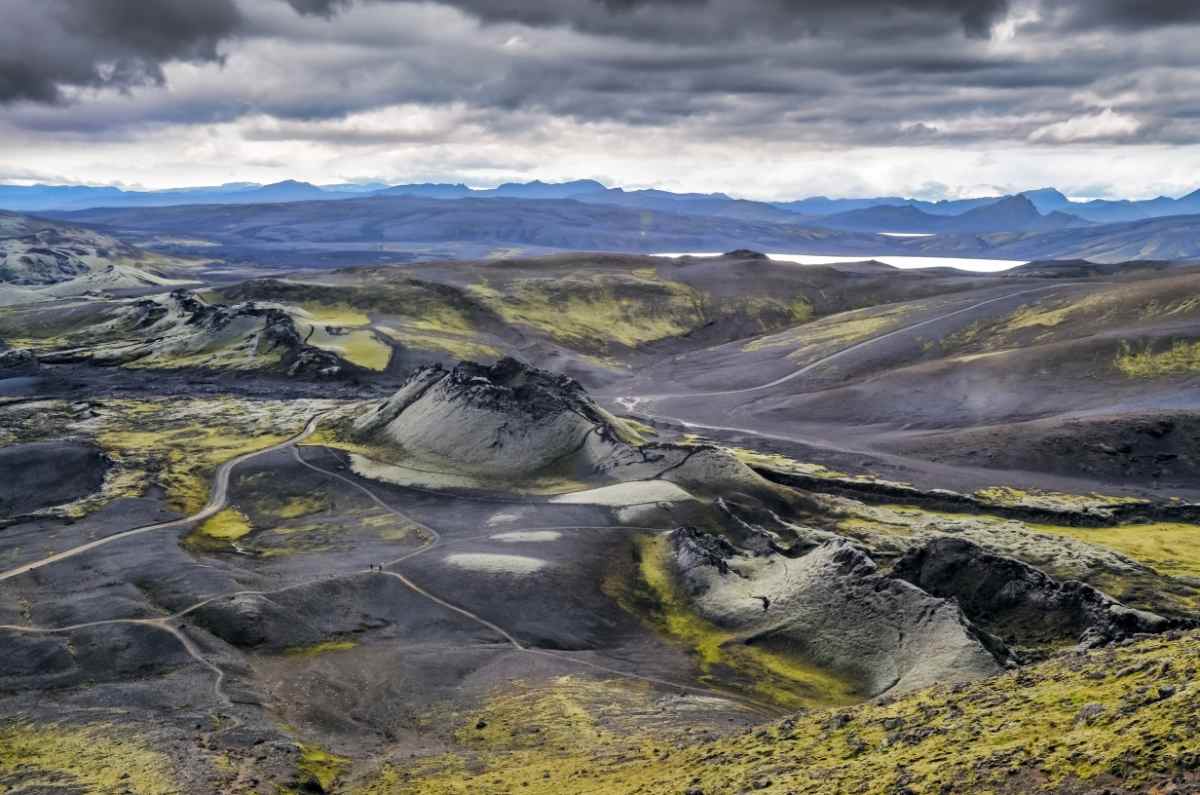